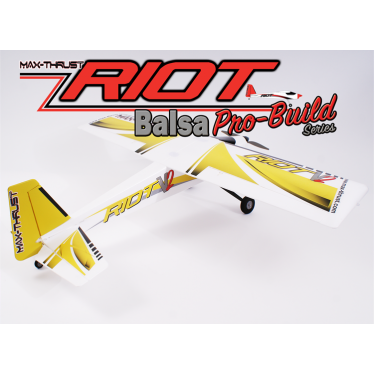 The Balsa Pro-Built (ARTF) Riot is the first Balsa model to be redesigned from an original Foam based design. Max Thrust realised that there were lots of you guys out there that really like a good quality Professionally built Balsa model but also loved the original Riot so that's what we have. Each model comes with the mounts and accessories so that the model can be assembled with either an I.C. Nitro Engine or Electric power, you get to choose the way you want to power your model without having to buy a fitting kit!

The model fly's well in either configuration and has a fantastic Quality Oracover finish which looks fantastic and stays clean and shiny. The model is available in four different forms, either a pre-covered Red, Blue or Yellow scheme or even an un-covered airframe for those who would prefer to create their own custom colour scheme. For I.C. power the Prototype model used an OS 40 but you can use up to a .46 size engine. The electric version used an Overlander 4250/06 motor with a 4cell Li-Po battery of around 2600mah and this proved to be very powerful.

The New Riot Pro Build should prove to be a great club flying model well into the future as its sister foam model has been. 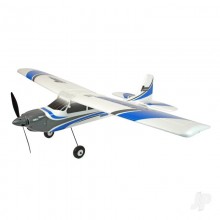